With the most profound sorrow and sense of loss, yet with confident hope in the Resurrection, the Annunciation Greek Orthodox Church in Memphis, Tennessee announces that our Pastor Emeritus, Reverend Father Nicholas Vieron, fell asleep in the Lord this morning, September 29, 2020.

The son of Leonidas Vieron and Ellas (nee Metaxas), Father Nicholas was born in New Orleans, Louisiana on November 13, 1925. He was raised in one of the oldest Greek Orthodox communities in the United States, and lived across the street from the historic Holy Trinity Greek Orthodox parish. An important event that influenced his life was when the then-Archbishop Athenagoras of America visited New Orleans. Father Nicholas remarked that serving as an Altar Boy during the pastoral visit was a great privilege, which influenced his decision to attend our Holy Cross Greek Orthodox Seminary. At the age of nine, Father Nicholas commented that he remembered his Papou standing next to him as he offered the Epistle reading on August 15, 1934. It was one of his oldest memories of serving in our Holy Orthodox Church.

Beginning his higher education in Pomfret, Connecticut at the age of 16, Father Nicholas received the blessings from his parish priest, Father Vasilios Bouterakos, to attend the Holy Cross Seminary located in Pomfret, Connecticut. He pursued and completed the religious studies program and graduated in May 1947. It was during his studies at Holy Cross that Father Nicholas was mentored by the then-Bishop Athenagoras (Cavadas) of Boston (later Metropolitan of Thyateira and Great Britain), the first Dean of the Seminary, who became a spiritual father to Father Nicholas after his father suddenly died during his first month of studies.

Although Father Nicholas graduated from the Seminary at its current location in Brookline, Massachusetts, he considered himself a “Pomfret Man,” having spent four years at that location. Since the Seminary was not accredited in 1947, Father Nicholas continued his higher education by pursuing a Bachelor’s degree from Marshall University in Huntington, West Virginia. Later in 1955, we would also earn a Master’s degree in History from the same institution.

Father Nicholas, also commonly known as “Father V,” fell in love with Bess Efantes (reposed in 2017) and had their engagement blessed by the then-Archbishop Athenagoras of America (later Ecumenical Patriarch of Constantinople) at Saint Basil’s Academy in New York on September 14, 1947. Following their marriage, he was ordained to the Holy Diaconate and soon, thereafter, was ordained to the Holy Priesthood on October 26, 1948 by Bishop Germanos (Polyzoides) of Hierapolis. His first assignment was to the Assumption Greek Orthodox Church in Louisville, Kentucky. After a year of service to the parish, Father Nicholas was assigned to Saint George Greek Orthodox Church in Huntington, West Virginia. In 1955, he was assigned to the Annunciation Greek Orthodox Church in Memphis, Tennessee, where he remained until his death.

As a young clergyman, Father V was serving in Memphis when the Rev. Dr. Martin Luther King, Jr. was assassinated. He was part of a small group of white ministers who supported the struggle for equality, serving as a former member and Chairman for the local Race Relations Committee. This was a controversial time in the history of the community, but the Greek community supported Father Nicholas’ efforts for racial equality. 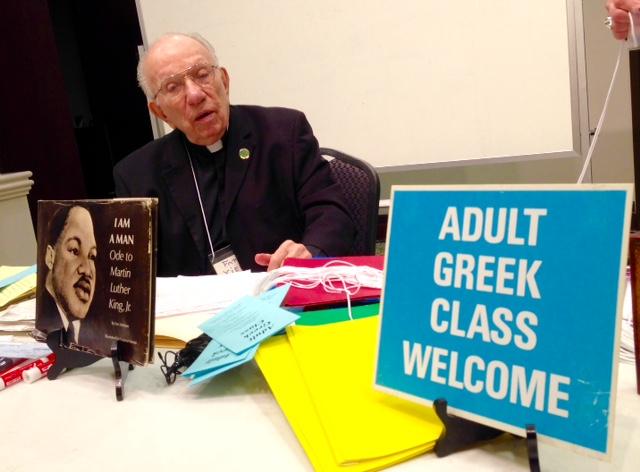 During his tenure in Memphis, Father V pursued post-graduate studies and enrolled at the University of Memphis School of Law. In 1970 he earned a Juris Doctorate degree but did not pursue the BAR Exam. He was a regular panelist on a weekly CBS television program entitled, “What is Your Faith” for over 20 years. In 1972, Father Nicholas started a 14-week Adult Greek Class, which was not only an introduction to the language of the New Testament and modern Greek, but also, to the history of the Hellenic culture. Father Nicholas would start this class each year on the National Holiday for Dr. Martin Luther King, Jr. in honor of a world he envisioned that does not have all the same traditions, creed, or color.

In 1991, Father V retired from active ministry and would travel to small parishes that did not have a full-time priest and help substitute for Sunday Liturgy’s. One of the major highlights during his retirement was serving as the Editor for the monthly newsletter of the Retired Clergy Association for 17 years. It was one of his personal enjoyments to interact regularly with all his friends throughout the Archdiocese. He, also, enjoyed serving as a Chaplain for the Memphis Touchdown Club, offering sports-related invocations at weekly dinner meetings during the college football season.

For nearly 65 years, Father Nicholas faithfully ministered to the Memphis community and the flock entrusted to his pastoral care. He has had a profound impact beyond just the local Greeks living in the area, but for the entire greater-Memphis community. Father V will be missed by all who knew him, especially his two sons Lee (Beverly) and Paul; his beloved daughters Ann and Joan; his beloved grandchildren, Nicholas (Ariana), Matthew, Stephanie Vieron (Kevin Leary), and Vasiliki (Cannon Gaudet); and his five treasured great grandchildren: Sophia Kali Vieron, Luke Vieron, James Leary, William Leary, and Magnolia Gaudet.

Remembering Father Vieron, Annunciation’s current priest, Rev. Father Simon Thomas said, “From the time I came to Memphis, Father Vieron has been a mentor and a friend. He welcomed me and championed my ministry in the parish. He was an icon here in Memphis. His influence on religion here and race relations is his legacy. May his memory be eternal!”

May His Memory be Eternal!